Welcome once again to another TV Show Brawl Series.  Today we examine a Battle Royale of brotherly proportions.  That’s right – The Wonder Years and Boy Meets World.  Aside from Fred and Ben Savage starring in their respective shows, they have many similarities.  Both feature main characters who endure an on again/off again romantic interest through out the series.  Both face the trials and tribulations of high school and beyond, learning about life, love and how not to be an jackass.  But who would win in an all out war between these two shows?  Would it be Fred’s group from the late eighties/early nineties, but which took place in the sixties/seventies, or would it be Ben’s gang, who’s show was on the more lighthearted ABC TGIF line-up.

This will be a 5 game series folks!  Break out Kevin Arnold’s crappy car he bought for a dollar.  Grab Topanga’s promise ring Corey gave her for Christmas.  Let’s start the brawl!

Match-Up #1: Battle of the Savages

Although both characters appear to have similar personalities as teenage romantics, they are two very different people.  I actually don’t think it’s that close of a fight.  Kevin Arnold seems like a goody two shoe on the surface, but he does some pretty ballsy things.  He tells the school bully to basically go screw himself and gets his ass kicked for it.  He’s constantly bluffing in poker.  And on his first day of high school he goes out of his way to piss off the biggest disciplinarian in the school.  This is some gutsy stuff.

How about Corey Matthews?  He’s a weenie!  When he got his driver’s license, he drove like ten miles per hour on the high way and signaled people to go around him.  He’s always panicky and flailing his arms.  Corey never takes a risk and is in constant fear of change.  Kevin Arnold wins hands down.  This is ironic, because when Fred Savage made a guest appearance on Boy Meets World as a sleazy professor, Corey knocked him the hell out.

Match-Up #2:  Battle of the Girlfriends 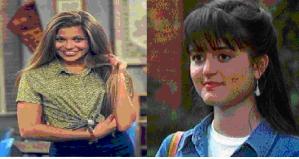 This is a little closer.  Both are exceptionally bright. Topanga was valedictorian for the John Adams Class of 1998.  Winnie scored above 1500 on the SATs.   Both started out weird and kind of dorky.  But really, I have to give this one to Topanga for one simple reason: she forced Mr. Feeny to give her one more A on an assignment that was supposed to be un-graded.  I mean, really, Mr. Feeny backed down!

Match-Up #3: Battle of the Sidekicks

Now on the surface, I’m sure you all think it’s Shawn Hunter, hands down.  Not so fast.  First of all, Paul Pheiffer is a genius.  He ends up going to Harvard!  Yeah, the guy may have some allergy problems, but we’ll let it slide.  We really need to examine Shawn Hunter though.  True, he’s a slick ladies man who always seems to be in control, but I’m sorry…he loses this fight.  Why?  He’s going to be his own downfall.  This is not an emotionally stable human being.  Every season he seems to become an emotional mess.  He’s always freaking out and running away.  He also got taken in by a freaky cult.  No way he holds it together in a fight.  Pheiffer pulls off a huge upset here due to Hunter’s own implosion.

Match-Up #4: Battle of the Idiot Brothers

Both are morons.  These guys are just plain stupid.  Wayne Arnold is pretty pathetic.  What has the guy ever accomplished?  I can’t even remember a single episode that revolved around him.  All he does is chuckle along calling Kevin “Butt-Head.”  And it’s always the same insult.  “Butt-Head.”  Think of something new!  Eric Matthews is insane.  In the earlier seasons, he seemed fairly normal; just a lazy kid who tried one too many get rich quick schemes.  But in the later seasons, he’s nuts.  He hid in a glass food case to try and sneak attack people.  He created a twisted TV show, ala The Truman Show, using his roommates as pawns.  And he followed his brother on his honeymoon for absolutely no reason, hiding in the sand taking notes.

But Eric will win for one simple reason; he can withstand pain.  This guy has been electrocuted, fallen off school roofs, sat in a cooking pot in Hawaii and he was constantly hurting himself while studying for the SATs.  He’ll do something that hurts himself, but he can survive it, whereas Wayne would just sit there cackling “Butt-Head” to himself.

Match-Up #5: Battle of the Mentors 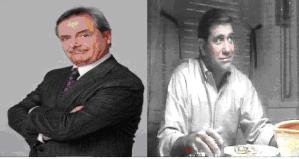 Well, it’s a tie match-up as we go to the final showdown.  This is a tight one.  I honestly don’t know where to go with this fight.  This is truly a Superman/Lex Luthor type of match-up.  Jack Arnold is a terrifying human being.  Whenever he grunted, I would have nightmares.  I’ll never forget the pilot episode when Kevin gets in trouble at school.  His mom and the principal talk for a couple minutes and all of a sudden after not saying anything the camera pans to Papa Arnold as he says, “I’d like to take him home now.”  He eyes bulged out like he was about to rip an entire city apart with his knuckles.  Holy crap.

But honestly, as scary as Jack Arnold was, I just don’t think Mr. Feeny would get fazed.  Mr. Feeny is like Danny Tanner, Wilson Wilson and Jason Seaver combined into one giant figure of wisdom and sage like advice.  Now there is no way Mr. Feeny can win a straight up slug fest with Jack.  So the real question is this – Can Feeny convince Jack to back down with mind games and fortune cookie advice, leaving him open for a Feeny finishing move?  The answer is….

Feeny wins it.  It comes down to this: Feeny would be able to convince Jack Arnold not to be angry anymore.  This new persona would battle Jack’s old persona, creating an internal struggle.  How can Jack win if he doesn’t even know who he is.  Wow Feeny, wow.  Well done.

Well there you have it.  The Boy Meets World crew conquers the Wonder Years.  Until next time.